Uriah Heep’s 25th studio album was released on September 14 and it has received great reviews from the music press and fans. It has also charted in many countries, including Germany – where it has been in the top 10 — The band’s most successful album upon release in decades, and one that many long-time fans hail as the band’s best since 1995’s Sea Of Light! If you have not heard it yet or looking for some new heavy classic rock – check it out! 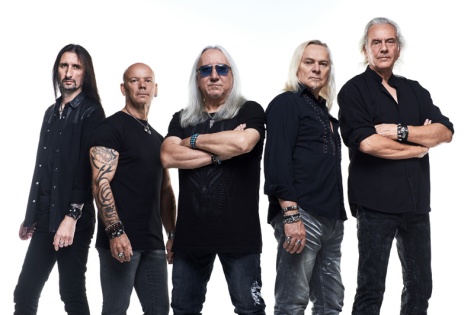 Here the band answers questions about the making of the album, some of the songs, and upcoming tour.

I am looking forward to 2019 – hoping many of the new songs feature in the band’s upcoming set.

If you haven’t ordered the album, there’s still a few items left at http://www.pledgemusic.com
also, check out
> https://www.frontiers.shop/featured-artist/

For upcoming tour dates and additional interviews and reviews on Living The Dream – visit : http://www.uriah-heep.com

First of all – Congrats on a Great new album!

Reviews and fans are all really happy with this album. [Many hailing as the best album since Sea of Light – or longer]. How was the feeling when it was finally done – Do you ever get that “this is going to be spectacular” thought when you’re done recording something new?

Mick: We definitely knew that what we had recorded we were very proud of, but until it is released into the masses you really have no idea. However both the media and the fans alike have given it the thumbs up, so we are delighted about that.

LTD has got a very lively and heavy sound to it. No doubt Jay Ruston got the best out of you guys. What was it about his approach that has brought out such a big live feel to this album?

Mick: The scoop on getting Jay to Produce us was to stay true to our heritage, but bring to it a freshness of sound. Jay has great set of ears for separation of sound, but it still ends up with everything powerful and cohesive.

You have an album with 10 really strong songs. Did you approach preparing for this one any different than the previous few Heep albums?

Mick: We were lucky enough to have some pre-production time whereby the band could spend time on the arrangements etc. This was very beneficial and then we made rough demo’s to send to Jay in Los Angeles. We recorded it in 19 days as we played as a band in the studio.

Take Away My Soul has drawn comparisons to the classic Between Two Worlds. What can you tell about that song and sort of where it stands for you amongst the Heep classics?

Mick: It is a strong rock sound with a good melody and very Heep. As for where it stands amongst Heep Classics only time will tell, but it has all the hallmarks of doing just that.

Knocking At My Door deals with mental health issues of fear, and is a solid rocker. How did that one come about lyrically and musically? [it’s a favorite]

Mick: I had the riff written and when my writing partner Phil Lanzon and I got together it moved along very quickly. It is about someone who hears things in his or her head, which to be honest has happened to many people I have known that smoke too much dope over a number off years. They end up paranoid!

There’s room for a good bit more instrumental moments on this album, most notably Rocks In The Road and It’s All Been Said. Are such songs [with a few dynamic changes in them] written as whole or are any kinda different song ideas put together or even jammed out a bit during recording?

Mick: They are written as a whole. Phil and I decided early on in the writing process that if a song needed to breathe, we would allow that to happen rather than stick to the verse, middle, chorus format.

Water’s Flowin’ is the first Heep ballad in a few albums. And its very different to anything the band’s done before. What kinda inspired that one musically?

Mick: I wrote the music for it in France a while ago, and when I played it to Phil he was quick to start adding a melody and lyrics. It has a neat story line about a guy who plays guitar by the waters edge and attracts a huge following. Then one day he is not there, and all that is found is his guitar. The question being would that guitar ever play that popular song again.

for Dave – this is your 2nd Heep album – what has been the difference to working on the last album as the new guy? and might we see more songs from Dave in the future? [Write much?]

Dave: I was very much the new guy on the last ‘Outsider’ album there wasn’t much time to think, we recorded it very quickly then went on a world tour..’Living The Dream’ we had more time to prepare the material, plus all time we spent on the road working together really comes through on the new album. I feel very proud to have written ‘Grazed by Heaven’ a collaboration between myself and Jeff Scott Soto on a Uriah Heep album, and I will present more songs to the band in the future.

Russell – How does this comapre to your experience with past Heep albums? Living The Dream seems to have so much more going as players, with changes, some cool intros, etc…

Russell: Well we decided that we wanted this album to have more instrumental bits in it which shows off our playing skills more…. This was easier to achieve as we had pre-production time to work on these ideas and get them sounding good….
That’s the best thing about pre-production, it allows you time to develop the songs into the results you hear now…

There are so many fantastic songs on LTD – how many do you foresee putting in to the live set? [would love to see more than half 🙂 . ] And do you foresee any arguments?

Mick: We have to be sensible, as we are aware that people who come to our concerts like to hear the classics like – July Morning, Gypsy, Easy Livin’ and Lady in Black. We then try and see what works musically and key-wise once we start putting a set list together. We never know until rehearsals start; but there will be no arguments as everything happens naturally.

Can you tell me a bit about the cover art and how it came about? It was obviously chosen some time ago.

Mick: I had the idea which the band liked and we sent it to our manager Ace Trump in Los Angeles, and he worked with an artist he knew, to bring it all to fruition.

The band’s tour of North America this year was probably the biggest tour the bands undertaken here in decades! and seemed very successful. How happy were you with the that sort of ‘return’ here, and when might we expect the band back here on the LTD tour?

Mick: We were super delighted with the response, with many sell out concerts. It was so successful that we will definitely be putting a long tour of dates together for 2019 and every year thereafter.

There hasn’t been any ‘official bootleg’ live releases for some time. will this series of releases possibly come back in the near future? Have a few shows been recorded over the past few tours for future release?

Mick: None that I know of, and we did not want anything in the market place to interrupt the flow of ‘Living the Dream’ being released.