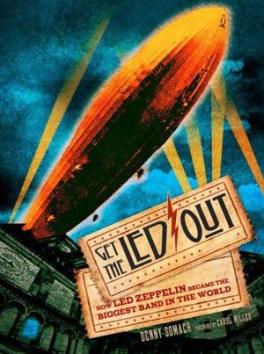 In 2012 album artist Ioannis was a big part of Denny Somach’s unique and outstanding Led Zeppelin book – “Get The Led Out”. The book – which is a fantastic and colorful biography of the band, which includes piles of interviews with those in, around, and famous connections to the 70s biggest rock band. Ioannis provided classic drawings of the band, bandmembers, symbols, and pieces related to the band’s history throughout the book, as well as covers and borders. His classic drawings can be seen and purchased in print Or originals at his own website. The man is also well know to Uriah Heep fans, and has a few items of interest coming up this year to tell about, among other projects and appearances.

Q: You knew Denny Somach well before starting “Get The Led Out”. How did the idea of you doing the artwork throughout the book come about? It makes for a very unique approach to a rock bio.

A: I have worked with Denny Somach for close to 30 years having designed logos for his national radio shows his label CINEMA RECORDS in the 80s, mostly electronic music and so on. We had recently reconnected and he told me of the LED ZEP book based on his successful radio show of the same name – GET THE LED OUT, that airs on over 300 stations with host DJ Carol Miller. I introduced him to my publisher as I was completing my book with Martin Popoff, and the rest is history as they say. I was approached to do the art – that started with the cover. The publisher wanted to have a painting representing each phase of Led Zeppelin through their career.  It worked well; the book quickly sold out of it’s hard cover edition and now is in it’s second printing as a soft cover.

Q: What was your own familiarity as a fan with Zeppelin? Any favorite albums and/or album covers?

A: I remember hearing Led Zep in 1972 (Misty Mountain Hop) while going to school in Athens and really liked them although at that time URIAH HEEP, T-REX and DEEP PURPLE reigned supreme in Europe.  Later on I grew up listening to them as any other 70’s teenager, remember doing to the movie theater to see THE SONG REMAINS THE SAME, it was like going to a concert – the atmosphere in the theater at that time. They were at their peak by then. I really like Physical Graffiti – my favourite album from them. As for their covers I am a big fan of Storm and Hipgnosis, so HOUSES OF THE HOLY,  IN THROUGH THE OUT DOOR, THE LIVE ALBUM, and of course – LED ZEPPELIN I.

Q: What sort of inspired the drawings you did for Get The Led Out? Mainly imagination, either famous pics or scenes…?  And is there ever any copyright or concerns regarding reinterpreting ideas from perhaps an album cover or a photo?

A: It was a very conscious effort. Since they were the dominating 70’s band I felt that the look of the art and design should reflect album cover art of the 70’s as opposed to a photo-shop slick look or Shepard Fairey art they used for the recent live album.  So it was done artistically to reflect that old look where black and white photos or line art was used and then stuck on a board and was colored in inks with an airbrush – that’s how HOUSES OF THE HOLY was done, the way I used to work in the 80’s and occasionally still do. I was very pleased with the results, and it gave the book a unique feel.

Q: Can you give me a few words about some of the specific drawings [prints] – such as Knebworth 79, The Hermit from IV, the 1970 band in flowers, Kashmir… ?

A: Again it was based on imagery that they were associated with at that time in their career, so the LED ZEP III cover for instance was the inspiration for the band in flowers and the images that I copied were from that era – I tried to resemble that ‘collage’ feel, for example. On KNEBWORTH  – I remember the crop circles in the English countryside and thought that would be cool to do that and have the zeppelin overhead with it’s light beams on. The Hermit from ZEP IV was my take of the drawing from the inner sleeve of that album; it’s also the tarot card image from that and also inspired by Jimmy Page’s fantasy sequence in the movie.

Kashmir was inspired by the music – once again the mighty zeppelin flying overhead, I did not want every image a painting of the band, I wanted to get into the band mythos a bit; plus I was asked to do a piece of each member also. 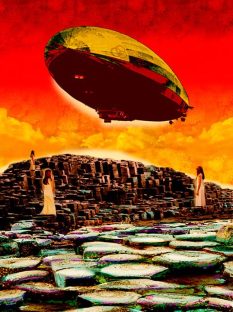 Q: As you sell these drawings through your site [prints] – how has response been from the Zeppelin fans? And what have been the biggest sellers?

A: Actually amazing, as I have sold a large number of the prints although the supplies are dwindling as they are very limited edition and when they are gone – they are gone, also private collectors have bought a number of the originals, I will shortly be posting  the remaining originals for sale and give the public a shot at them.  One of the pieces sold for $15,000. – to give an idea.

Q: Have you had any contact or feedback from Plant, Page or Jones? Anyone in the Zep camp have any of your prints that you know of?  🙂

A: I haven’t but Denny has; he has a picture of Robert Plant holding up the book – So I know he liked it. Recently I gave one to Lenny Kravitz during a photo session and he was wowed by it. Also, recently here in the States – on the FXX channel, Denis Leary’s new show SEX AND DRUGS AND ROCK N ROLL aired and in one episode he had the book prominently featured behind him which was very cool.  I also get a ton of fain mail about it.

Q: You also recently did the cover for the new House of Lords album. I’m not a huge fan, but love the art. What can you tell me about your connection and this piece?

A: Thanks.  Yeah, I really liked it a lot, it was a labour of love really.  I have known James Christian since I was a teenager as he played in a number of bands in my town. We always talked about doing something. My Friend Jeff Canatta from Arcangel connected us again and i did the latest. He let me run with it so it turned out well.  I just put up the original for sale… Let me know if you wanted to purchase it lol.

Q: What other projects are you presently working on that you can divulge any details about? And any future projects you’re looking forward to?

A: In February of last year I accepted the position of Creative Director with Sweden Music Group, a hard-rock metal label. So I have my hands full with that.  Also I am working on a number of new HEEP projects this year, as they will continue the bootleg series and a few re-issues that I will do new art for.  I also finished the new JON ANDERSON & JEAN LUC PONTY album that came out in October and also I redesigned the 20th anniversary FATES WARNING A PLEASANT SHADE OF GRAY with new art, a very deluxe digi-pak, double sided vinyl and t-shirts. Very proud of that, one of the best packages I have done in recent years.  I also a very limited deluxe portfolio signed by me and the band that is available on my website. I am currently also talking to SUPERTRAMP, for their release and a few other things I can’t divulge yet.

Q: How have the Heep covers you’ve done been received via print sales? Any favorites amongst the buyers? And can Heep fans expect to see your work again in the future?

A: Extremely well! They have very loyal and fanatic fans. WAKE THE SLEEPER  and LIVE IN KAWASAKI  are real movers, and yes – I have been asked by management to do a number of upcoming HEEP projects in the new year.

Q: Do you ever get out on the road and do record fairs or comic exhibitions — anywhere fans can actually see you in person?

A: As matter of fact yes. In the past I had attended Heep concerts in the US , set up shop next to Roger Dean at the YES FEST  and sold well!

I am planning to be selling my stuff at the two major dates FATES WARNING  is playing for the 30th anniversary of AWAKEN THE GUARDIAN, one of my most famous covers.  I will be signing books and prints this year at SXSW in Austin, Texas .   And I am currently in negotiations to have my work sold in the upcoming rock cruises and attend them.

*I want to thank you for the opportunity to talk to you, and would love if the fans would visit my website and Facebook page links below.

They may also contact me at info@dangerousage.com  – I always like to hear from them and if they have any questions about my work or would like to purchase something unique.