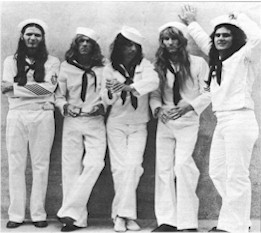 The new SACD release of the last album from the one and only Alice Cooper group, in November of 1973, gives me a chance to revisit my favorite album from the greatest American rock n roll band! Part of what I see as the band’s ‘greatness’ was there originality, ground-breaking, rebellion, knack for memorable and timely anthems, grit, and a string of classic albums that remain unmatched by any other band.

Muscle of Love was a change in many areas from the 4 previous Platinum selling albums. First and foremost, it was where management and the press really separated Alice from the band of the same name [it was a band, with 5 equal members before there was a solo act]. Even the Circus magazine cover story from January of ’73 is all about Alice, himself, and very little mention of the band. Secondly, although this album came with a ‘theme’ [sex], it was definitely a bit tamer musically, lacking that lengthy macabre highlight [ala – Dwight Fry, Killer, Blue Turk, I Love The Dead…] – that theatrical centerpiece or ending to all, that shocking track that could upset certain anti-rock crusaders or that a stage show could be built around. Thirdly [is that a word?] – It lacked Glen Buxton! Though the guitarist with whatever personal demons he had, appears in some of the writing credits, he was ‘not invited’ to play on the album, and his grit and attitude are clearly absent, as producers Jack Richardson and Jack Douglas go for a cleaner sound. Mick Mashbir and Dick Wagner [RIP] did great work filling in the guitar work on this album, but really – once you take away such a figure as GB – the outcome changes.

Even before its release Muscle of Love caused controversy and issues in various countries and with retailers – due to the title and to the packaging. In South Africa the album was intercepted and had inserts of the ‘nude wrestling’ emporium removed before they’d be sent to record shops. In North America, management had to clear the title with a number of retailers first, and even then its cardboard box and ‘water stain’ packaging presented issues in places. This Audio Fidelity release does a good job of retaining the original art via CD, with a miniature of the nude wrestling insert included and sleeve pics with the booklet [where’s the lyrics?].

Muscle of Love featured a number of great tracks that would’ve made for fine singles, but IMO lacked that monster hit, ala “Schools Out” or “I’m Eighteen”. There’s a great flow to this, although as noted above – it lacks that twisted lengthy high point. “Big Apple Dreamin” opens this album, not with a bang, but it’s a great song, about moving to New York and the adventures that await. Love the use of the organ in this track [courtesy of Bob Dolin. Where the heck is that guy?], especially the break, almost giving this a Deep Purple feel. This album is largely straight ahead rockers, with “Never Been Sold Before” and “Muscle of Love” being the 2 stand-outs, both with cool riffs and the former being heavier and more aggressive than anything on this album – IMO the band’s most overlooked rocker. Elsewhere, I enjoy all the rockers here, from “Working Up A Sweat”, to the more laid back James Bond inspired “The Man With The Golden Gun” [purposely written with the then-forthcoming movie of the same name, but never accepted for use], the single “Teenage Lament ‘74”, which revisits “I’m Eighteen” – musically and lyrically, but slightly softer [especially with all the backing vocals from Liza Minnelli, Ronnie Spector, and the Pointer Sisters..Yeesh!]. Last track is another one of my favorite AC underrated songs in “Woman Machine”; a more mid-tempo guitar heavy track, lyrically based on a futuristic computerized female partner. [I kind of like the idea!] . Lots going on here between the guitars, and the added ‘computer’ sounds and effects. The 2 non-rock tunes here being the classic ballad “Hard Hearted Alice”, a sort of more serious lyric reflecting on being Alice Cooper, and the almost 1920 cabaret sounding “Crazy Little Child”. The latter, tho I like the song, IMO sort of lets the whole album down a bit, not so much lyrically, but musically with its piano and banjo [courtesy of Paul Prestopino], this would’ve been better off as a B-side [much in the same way “Mary-Ann” could’ve been left from the previous album!]

A few things that really stand out after listening to this is just how much this Was A band – Dennis Dunaway’s bass drives most of these songs, and Neal Smith adds so much more than a simple pace these songs; and Michael Bruce – well he took on a sort of musical-director role in the writing and via rhythm guitar. It is no wonder Alice as a solo artist, despite releasing some fantastic albums, never really matched the AC band output. On Muscle of Love, there’s a more serious musical approach, with even Alice singing better than before, but with less snarling and attitude [see Teenage Lament].

Despite what this album lacks, it is still my favorite AC album. Understandably it did not do nearly as well as the “Billion Dollar Babies” album, which featured a number of hit singles, and was the only AC album to hit #1, so it also had the impossible task of coming soon after [released in the same year] such a huge album and tour. Often overlooked as the band’s “Greatest Hits” package came soon after, and then members went on to solo projects, with Alice taking the name, and the original band [in whole] never to return again. Am still waiting for the Billion Dollar Babies “Battle Axe” album to be given a proper CD [or SACD] re-mastering and release, the last gasp of the real Alice Cooper band.

For more info check out www.audiofidelity.com

*Drop me a note, let me know what you think of this album!