So, finally sat down and dug in to some new [and newer] releases…2016 was pretty good for new releases and vault releases — new Glenn Hughes, new BBC releases from Queen and Zeppelin, 2 disc reissues from Sabbath and Heep, and plenty more to come in 2017…. So here is the last of the latest.

Graham Bonnet was best known for fronting Rainbow after Ronnie James Dio, but sadly only lasted one album! I really liked Down To Earth, Bonnet having a unique voice and style [singing and stage], and it was a shame there wasn’t a follow up. He then formed Alcatrazz with Malmsteen and members of US band – New England; in fact they still perform [minus Malmsteen]. The Book does a good job in getting Bonnet back to that heavier rock sound and energy of his old bands. The songs are great and this is an easily likeable rocking album – tracks like Into The Night, Welcome To My Home, Dead Man Walking, and the title track are all memorable rockers . All 11 tracks make for a thoroughly good album of new tracks, with The Dance being the favorite. Bonnet’s band also features Jimmy Waldo [New England, Alcatrazz] on keyboards and guitarist Conrado Pesinato [from South America].

Disc 2 of The Book is 16 tracks from Bonnet’s past, re-recorded by Bonnet and his current band. I guess it’s a nice reminder and update that this guy was more than just another Rainbow singer, lots of classic rockers here. 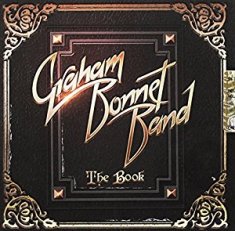 I remember when the first Hardline album came out, and it something of a super-group with guys from Journey and this great new singer, and a fine cover of a Streetheart classic! Now Hardline is still fronted by the same guy [Johnny Gioeli], who also fronts Axel Rudi Pell’s band. The band here wanting to go back to a heavier sound. Not sure on the previous Hardline albums that came before, but if you like that 80s styled HR – heavy guitars, heavy riffs, big solos, big vocal choruses, a mix of rockers and power ballads… Solid performances and decent songs; but a bit predictable. May sound cooler in the car.

Without getting into the whole past of Great White, I must first confess I really enjoyed this band in my teen years – bought those early albums in the day. I thought these guys were ahead of the of usual 80s ‘metal’ bands, mainly ‘cause GW wasn’t a metal band, but a blues rock outfit with a great singer. However, at a certain point I didn’t feel I could listen to the band or follow any of the related news in good conscience – Great White just didn’t exist to me for many years. But over the past year or so I got curious and pulled those old albums out and picked up a Greatest hits CD. There is another version of Great White, but it lacks that distinctive voice. I will simply say – if you enjoyed GW back in the early days – you will enjoy this. Aided by a very good band, including former GW member Tony Montana, Jack Russell’s Great White has come out with a solid album of rock, blues, ballads – maybe a little lighter overall, but musically a very good set of songs; lots of variety and fine productions, and the vocals are as good as Jack’s ever sounded. Fave tracks- My Addiction, She Moves Me, Spy vs Spy , Don’t Let Me Go. 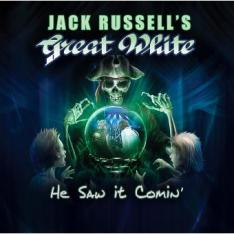 Chris Rainbow is a British singer/songwriter/guitarist and Paul Newton was the original bass player in Uriah Heep. A guy who never gets enough credit for his early contributions to the band, having been the link that made the Heep happen in the beginning, and having played on the first 3 albums. Chris Rainbow has recorded a number of albums since the 80s, in various styles – country, rock, acoustic.. [plenty of listening at his website]. Not knowing what to expect, but as a Heep fan I wanted to check out this album with Paul, as well as the 2 Heep tracks they’ve re-done here. The Heep remakes being “Walking In your Shadow” [which leads off the disc] and “Real Turned On” – both from the 1970 debut with Paul in the writing credits. Chris has a good rock voice, and writes some memorable tunes, like the scary rock of “Satans Claw”, the anthem “Last Man Standing”, pop rocker “This Lonely Road”, and the country ballad “Watching My Last Chance Fade Away”. There’s also a worthy cover of the Big Joe Williams classic “Baby Please Don’t Go”. Check out more on Chris Rainbow and this project at Chris’ site:

Jorn Lande is one of the finest and in demand metal singers out there. He’s released a number of covers albums, most notably his Dio album – which was by far the best Dio tribute out there. On his latest, Jorn has chosen a big variety of rock, metal, and pop songs – from Frida to the Eagles to Foreigner, to Sabbath to Maiden, to Journey, Deep Purple, Queen,… it all sounds good – and Heavy! And that’s great if you like Jorn doing his Dio style, only thing is it’s ALL heavy. Big metal guitar sound, heavy bashing drums, and Jorn’s darker presentation – makes for a strange listen on a few tracks, but his versions of Paul Stanley’s “Live To Win”, Maiden’s “The Final Frontier”, and Purple’s “Stormbringer” all suit him well and sound fantastic.

Night Ranger were a great band [may still be], with a couple of fine singers, Brad Gillis on guitar, and plenty of memorable melodies. For the most part they still sound great here, as they play out all the classic hits like “Sentimental Street”, “Four In The Morning”, “Sister Christian”…..and more. And I will likely pick this up. My only beef with such live albums is the reminiscing between songs and the crowd sing-a-longs! I don’t need to hear what the biggest movie of the year was before each song or hear the crowd sing the songs I want to hear. But, oh well. Again, just my own issues. Looking forward to putting this on more…but flipping through the chatter…