Doogie White became a name to classic / hard rock fans years back when the Scottish singer was chosen for the re-incarnated “Ritchie Blackmore’s RAINBOW”. With Rainbow, White sang on the album “Stranger In Us All”, which was well received by long time Rainbow / Blackmore fans. He also toured the globe with Blackmore’s Rainbow, before Blackmore decided to move on to other projects and split up his latest version of Rainbow, leaving Doogie White to look for a new gig. Prior to Rainbow, White had sang in the UK band Midnight Blue, and appeared on 2 English Steel albums [produced by Lea Hart], which featured a number of other British rock veterans.  I swapped notes with Dougie about a few things, and he answered my questions here. The man reveals some interesting info about his past, his time with Rainbow, and his current happenings! 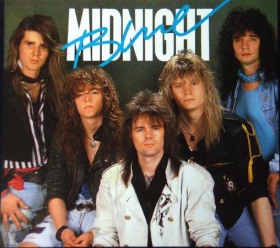 *Since this interview, originally posted in October of ’99,  Doogie White has become one of the best and hardest working singers out there. White has recorded numerous albums with numerous acts. I am way behind, loved the Praying Mantis album he did way back, but after more recently getting the 2 Demon’s Eye albums he did in 2011 & 2015, and lately picking up the Michael Schenker Group albums he’s on, I am keen to get caught up [currently watching a live show on youtube with Tank!] . 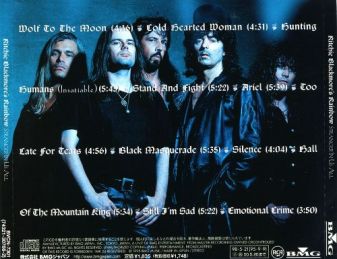 anyway, for more info check out http://www.doogiewhite.com [this site needs updating], or look Doogie up on facebook!
Q) First album you ever bought?
D) Warner Bros. Music Show, with the Doobies, Little Feat, Montrose
Q) Favorite bands, musos, singers in your early days?
D) David Bowie, Roy Wood, Tom Jones, The Monkees, The Beatles
Q) What was-your first pro band? [when did you get into it full-time?]
D) Strangely it was Midnight Blue in ’88. Although I was in La Paz for 4 years but it was semi pro. We released 2 cassette albums.
Q) Did any of these bands feature anyone else of significance in later years?
D) MB’s guitarist went on to play with GUN, Bruce Dickinson and currently guitarist with pop sensation Robbie Williams. MB’s keyboard player Jem Davis – played with UFO and FM. The La Paz Boys took the other road and made millions in computers property and mining.
Q) What kind of music was Midnight Blue? any album releases?
D) 80`s AOR but a bit heavier than most.
Q) Any band comparisons?
D) We released “Take The Money And Run ” on Zero in Japan. Not really I didn’t listen to AOR so I couldn’t say. Alex liked Jake E Lee, so maybe it was like that.

Q) Midnight Blue did some gigs with Uriah Heep back in 89 or 90, what do you recall of these? any good stories??
D) I had a question that I’d always wanted to ask and when the opportunity to do so arose I did. It went something like this…….. “Trevor can I ask you a question?” He sighed as he thought he knew what was coming , another BOWIE question perhaps. “How come you’re credited for singing the last song on Conquest when it is clearly JS. He brightened up at that and told me why.  [RIP TB]
Q) You were also involved in the English Steel projects — what was this all about?
D) It was British Steel and was an album released by Metal Hammer in 89/90 to promote British bands to a wider audience. Magazines have done this for years.
Q) [I attached a section from my Sloman discography about the English Steel albums]. If it ain’t the same thing, what did you do on this?
D) AHHH so this is where they went… Gotcha’ya, Lea Hart! Well I did some stuff for Lea and he does have a reputation for making up compilation albums so this is probably one of those. I don’t have it, I only had a crackly demo of the songs I sang.
Q) Familiar with the “Metal Christmas” project which includes many of the same names as on English Steel albums?
D) Yes, my Mate Andy Barnett plays guitar on this
Q) What else had you been involved with during the 90s prior to Rainbow?
D) After MB imploded, for whatever reason – I did a lot of session singing for various Publishing houses, singing songs written for artists like Cher, Tom Jones, Paul Carrick to name a few. Also I got involved with several writers whose demos I sang. I did an album with some friends under the name of Chain. Heavier rock than usual.
Q) Any releases? [any info, label….]
D) The Chain album is on JVC Victor in Japan and is called “Eros of Love and Destruction”. I liked it though it was just demos.

Q) You auditioned for Iron Maiden when Bruce left!?
D) Yes, 2 times
Q) What happened with that?
D) I was first in and last in. I sang 20 songs over an afternoon with them. I got a better appreciation for them and Bruce after that; it was hard work. I would have really loved to be in Maiden but then I couldn’t have been in Rainbow and that was where I had wanted to be since I was 15. Obviously they gave the gig to Blaze.

Q) How did you come to work with Rainbow?
D) I had given a tape to Colin Hart Purple’s tour manager when JLT was singing for them, when Ritchie left he called me and asked if I’d come to NY and sing for him.
Q) Audition?
D) 5 days worth
Q) Who else auditioned when you did?
D) No one, I was the only choice

Q) Did you feel any pressure following in the footsteps as such great singers as RJ Dio, Graham Bonnet, and Joe Lynn Turner??
D) Not pressure as such but, I knew as a fan what I’d have wanted in the new Rainbow singer and strived to deliver that.
Q) How do you feel your vocals and contributions to Rainbow compared to theirs?
D) That’s not for me to say, others will judge me. I was pleased with my input as was Ritchie and I have to say the fans were very generous in their reviews and appraisals.
Q) How were songs written between yourself and Ritchie?
D) He jammed the music I jammed the melodies and lyrics and wallah… a song.

Q) How much input did the various members have in Rainbow compared to how much it Ritchie controlled / lead ?
D) It was Ritchie Blackmore’s Rainbow – he made the decisions. At times he was open to suggestions, and if I felt strongly about something I’d speak up. But he has been at the top of the tree for a long time so he does have a fairly good idea of what is what even if sometimes his decisions seem off the wall
Q) How was Ritchie [in your view] working with?
D) *I loved the man and his music, it was not difficult for me until outside forces wanted a career and influenced him, then he would pull me up on the most trivial things. It got irritating to be scolded like a naughty boy

Q) What were some of your fave tracks from the “Strangers…” album?
D) I have good feeling about them all.
Q) Any stand out? Any stories?
D) We wrote “Hunting Humans” in 45 minutes, it was just so fast where “Silence” was like pulling teeth we had so many ideas for that one. “Black Mask” was another that went through changes I was happy with the way it came out. “Ariel” was great although I had only input into how the vocals should be as it was a folk song Candy and Ritchie had written for their own thang. Personally I’d would have liked a more free reign lyric – wise but Ritchie wanted lyrics that “girls would like”, I felt intimidated and gave in. When Ritchie was awake we all had to be awake and he chucked A meat cleaver at my door to waken me…. and then a tin of cat food, then corn flakes. It was a splendid time and I took it all with good humor.

Q) How well was the band received live?
D) Very well, I had a blast every night We picked up lots of fan voted awards in Japan , Germany, South America.
Q) What stuff did you enjoy doing the most?
D) Easier to say what I didn’t enjoy. I didn’t see the point in “smoke on the water” its been done to death that’s why I gave the mic. To the crowd to sing it.
Q) Did you guys get any flack from ‘Purple nuts?
D) No flack at all that I heard except in Brazil when a Dio nut was giving me grief from the front of the stage, I demanded his DIO shirt and wore it for the rest of the show, sang a bit of ELF and gave him a beer.

Q) Why did the band ‘break up’?
D) It a long story, let’s just say Ritchie wanted to do other things
Q) Do you still have contact with Ritchie?
D) Not directly.
Q) What do you think of his current stuff
D) I enjoyed the first record a lot.
Q) and would you / could you foresee another Rainbow project in the future with yourself involved?
D) Lovely thought but unlikely, he has to dominate people and make them bow to his will. I stopped that in Denmark in 96, it was never the same again :-))
Q) I’m curious……………
D) Violence is never an option…..
Q) What have you been doing since the Rainbow gig?
D) I start recording my first solo record in January. I’ve done few different things Brazen Abbot “Nostradamous”, and Tributes to.. Maiden, ZZ Top, Whitesnake. Plus Steen Mogenson from Royal Hunt. Backing vocals on 2 country records, A Rover car commercial. Other stuff I can’t recall.
Q) Any tracks you’ve done yet on the tributes?
D) Maiden > “Hallowed Be Thy Name”, “The Evil That Men Do”. ZZ Top > “Tush”, “Planet Of Women”; ‘Snake > “Slow And Easy”, “Judgment Day”, and “Crying In The Rain”.

Q) Favorite rock albums of all time?
D) Made in Japan [DP], Aladdinsane [Bowie].
Q) Do anything outside of music?
D) I drink beer and drive mini coopers – not at the same time you understand.
Q) You have cited John Sloman as a favorite singer / influence. What is it about his voice / style that you appreciate as a singer yourself?
D) He is unique and has edges to his voice that you either love or hate, I have enjoyed him since his Lone Star days. He can do things, runs vocally no one before or since has managed to do. I nicked loads from this man.
Q) What do you think of Heep’s other singers > David Byron, John Lawton, Peter Goalby, and Bernie Shaw?
D) As with all things the original is considered the best and so it is with Byron. I’ve never heard John Lawton but I recently met him and his lovely wife and he was charming. Goalby sang on my favorite Heep album – Abominog, and I saw him twice. Bernie is the complete pro and taught me quite a bit I’ll always be grateful to him for taking this off the wall Scottish maniac and calming him down on that Heep tour. 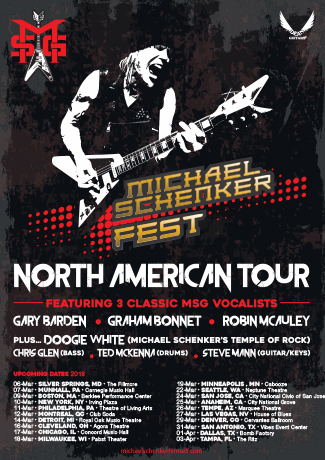