Having just written a review of the WASP era from 1989 to ’95, I decided to take this double album back out and give it a few proper listens. I bought this 2 years ago [in different formats] with great expectations, and not understanding what it really was [my mistake, though I likely would’ve bought it anyway]. I then realized that this is all re-records… OK… And as I’ve said before – I loved the original album when it came out [still do], so why a new recording of it all [?], and a few previously non released tracks. My first impressions were that it was more polished [losing some of the aggression], and the changing of some of the lyrics [removing profanities] was a bit of a turn off. So I’d put the album away for some time, not enthused by the whole idea. Having said that, the current edition of WASP does kick ass, which [on here] also includes Doug Blair [guitar], Mike Dupke [drums, who has since left the band], and Mike Duda [bass] – albums like “Babylon” [2009] and “Golgotha” [2015] were fantastic releases! Blackie’s songwriting since 2000 never gets dull, and his voice is still strong. If anything, the man’s passion that he pours in to his songs and recordings has only gotten more intense. So, while on a WASP kick this past week, I thought I should pull it out give it a few listens, as it’s an end to The Crimson Idol story. Kosh returned to re-do the cover-art as well, adding a bit more color. 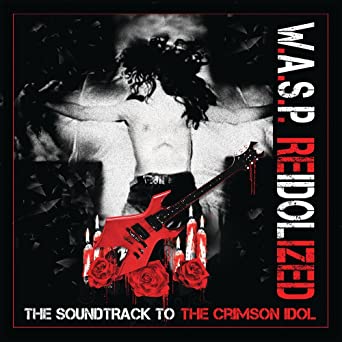 Despite my original response to this album, I have to say this is a great production. The sound is cleaner than the original, the mix is excellent and with a bit of keyboards that definitely give this a big movie soundtrack feel, though it possibly lack’s a bit of the raw edge of the original. The performances are pretty flawless. Doug Blair does a superb reworking of Bob Kulick’s original guitar leads. Blackie still sounds great, but not as angry this time around, the words seem to be clearer upon listening, and I find the only noticeable aging in his voice during some of the softer parts, such as the acoustic verse that starts the last song.

There is a few previously unheard songs that were either left off or not competed at the time of the original album. 2 are more so interludes tying in with the story as they clock in at under 2 minutes [each]. “Miss You” did appear on Golgotha, from 2015, but in interviews Blackie claims the song was the first one written for The Crimson Idol way back, but was never finished then, so it suits the story here quite well, and it’s a solid heavy ballad; a bit longer than the Golgotha version. “Michael’s Song” is one short passage, a sweet tune with acoustic guitar and synths – reminds me of “Euphoria” from ‘Unholy Terror’, and ends with the breaking of something [a mirror, perhaps?]. The other short tune is titled “Hey Mama”, which is just synths [playing the orchestra role] and vocal. Now, interestingly, my black vinyl copy of this has 2 – side ‘C’s , so I put on side D first and lo and behold – there are the 2 best ‘new’ tracks! “The Lost Boy”, a bit of a rocker, which would sit well right after “Hey Mama”, and definitely sounds like it always belonged on The Crimson Idol, musically. Best surprise here though is “The Peace”; it’s a ballad, but it’s moving – musically and lyrically; it’s uplifting, and regardless of it’s place in this story, it’s a fitting song for the times. Great vocal and harmonies, orchestrated synths… features Frankie Banali on drums [which makes me think some of this track is leftover from ’92]. There’s a little dialogue between Jonathan and the Mirror before the final epic “The Great Misconceptions of Me”. Not sure why the 2 B-sides to the original album weren’t worked in to this[?]. Blackie’s also altered a few words in “Chainsaw Charlie” [and elsewhere] to remove the profanity the original had. I wasn’t crazy about this upon hearing it, as it takes away a good bit of the anger in the song, and the effect that the original language delivered.

Glad I pulled this out, It’s a great double LP set. There’s also the DVD of the film, I imagine I’ll get around to watching it some day, but really, for me, I’m happy with the music telling the story [a book would’ve been cool].