Tommy Bolin’s “Teaser” [1975] was released shortly after Bolin’s one and only studio album with Deep Purple [“Come Taste The Band”] . Though his commitments to Deep Purple at the time left no chance for a solo tour to promote it, the album remains a classic piece of 70s rock, that saw Bolin as songwriter, singer & guitarist cover a number of genres. I always shake my head when I see this album in a used bin at the flea market or a used record shop, and some idiot has stuck it in the ‘heavy metal’ section!

Teaser boasts everything from funk, fusion, Latin, reggae, blues, hard-rock… and it all flows nicely. It features a number of players, most notably Jan Hammer on a few tracks, David Foster, Jeff Porcaro [Toto, RIP], Prairie Prince [Tubes, Todd Rundgren], and Stanley Sheldon [Peter Frampton]. Then-new Deep Purple bandmate Glenn Hughes also guests on the ballad “Dreamer”, singing the final verse. Dreamer is my favorite track here, though not written by Bolin [penned by former Energy bandmate Jeff Cook], beautifully interpreted and one of Bolin’s heaviest and memorable solos. The album’s title track is the song most will recognize, though not a single – it is a classic hard rock song, with a cool riff intro, and would be covered by Legs Diamond, and [more notably] Motley Crue. The Latin styled “Savannah Woman” was issued as a single, as was the album’s lead off track “The Grind” – a great rocking tune, with a cool hook, slide, and funk – a song Van Halen would perform in their early days [check it out on youtube!] . “Wild Dogs” is a favorite here; one of those storytelling songs highlighting Bolin’s soloing as well as his vocals; this one would appear on a few other releases, stretched out for more of Bolin’s guitar, and it’d be 1 of 2 tracks from this album that featured in Deep Purple’s live set for a while. One of 2 instrumental cuts, “Homeward Strut” would feature later on in DP’s live shows [in other countries]. “Marching Powder” is the other fusion instrumental, with a great riff intro, kinda fast and wild with lots of drums, saxophone, and plenty of changes. “Lotus” closes out Teaser, and it’s another that features plenty of changes from quiet beginnings to a very heavy rock tune. 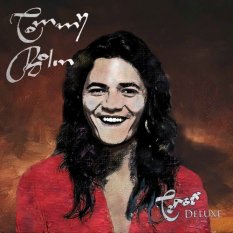 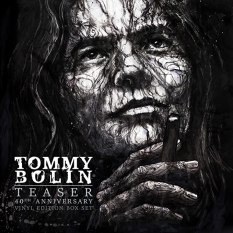 Although Teaser was not a huge commercial success at the time [peaking at “96 on Billboard], it remains the favorite of Bolin’s career, with numerous reissues, a box set, plenty of retrospective reviews & discussions by fans and rock historians. There’s also a number of alternative versions of many of these tracks on various posthumous releases. Teaser is an essential 70s rock album, whether you only know Bolin’s name through his Deep Purple or James Gang connections or know the title track. It is more than simply a Hard-rock album by ‘Purple’s guitar player at the time, as numerous listens will bring something you may not have locked on to before, with all the varying styles and tunes. A follow up album – “Private Eyes” was released within a year, and fared no better commercially, and a bit less historically. It would be Tommy Bolin’s last album while he was alive. Dead at 25, but in just a 7+ year career Bolin was a major songwriter and performer on 5 band albums, writer/guitarist/singer on 2 solo albums, and guitarist on 3 other notable releases. He left a huge catalogue, and one that has grown over the years since his passing, but Teaser is THE Tommy Bolin to have – more so that anything else he did.