Got a number of new things, some of it is stuff I had or could’ve had mid last year, but am glad I’ve got it and given it a listen. Aside from my newer favorites – like the Magnum’s latest or Swedish band Black Trip’s second album [both of these I dug so much, I immediately ordered the vinyl!], I’ve picked up a few other things not mentioned here like a fantastic 2LP set of The Jimi Hendrix Experience at the Atlanta Pop Festival, 1970 [“Freedom”] – great performance, sound, and packaging. Also recently picked up Moxy’s “40 Years And Still Riding”, which is one disc of re-recorded Moxy classics and one live disc from the band’s 2013 show in Toronto – with founding guitarist Earl Johnson and former Slik Toxic singer Nick Walsh. A great up to date sound, with Walsh adding a bit more ‘metal’ to the Moxy classics, originally sang by Buzz Shearman [RIP]. From last year, I’m still big on Iron Maiden’s latest massive set [3 LPs!] – “Book Of Souls”, enjoying every side of it; as well as the latest from David Gilmour “Rattle That Lock”, such different and  classy stuff.   Anyway, here’s some ramblings of some new and newer stuff I’ve been listening to.

I haven’t heard a lot from this Canadian metal trio, that’s been going for a few decades. But, an interesting title and a curiosity to sit through this album, and glad I have! Sounds like a fun, fast paced, guitar rock album, that’ll sound great in the car! The title Anvil Is Anvil is based on the band recognizing what they are best known for and not going out of the lines. Anvil consists of guitarist/vocalist Steve “Lips” Kudlow, drummer Robb Reiner, and new bass player Chris Robertson. Anvil Is Anvil only serves up old school metal, lots of riffs, thundering drums, without any added frills [no keys or excessive intros or passages], lyrically taking on everything from the metal anthem types like “Run Like Hell” and “Up, Down and Sideways”, as well as more serious topics as “Gun Control” and [religion’s influence] on “Die For A Lie”. Faves include the fast paced “Runaway Train” and “It’s Your Move”, both have a Motorhead vibe going on [the latter referencing Ace of Spades]. Some cool Canuck metal for ya!

*available in CD, digi-pack, and vinyl!

You cannot really go wrong with a Magnum album. First off – you got the outstanding Rodney Matthews artwork that makes this package stand out to begin with! These guys know what their fans want and consistently deliver it each time out. A few rockers cool guitar rockers, a few upbeat pop-rock arena favorites, those mini-epic tracks featuring classy piano and keyboards, that build up in to heavy choruses, and those simple sweet, quiet ballads. You really can’t get bored. The band’s latest “Sacred Blood, ‘Devine’ Lies” is another superb album. No big keyboard intro here as the guitar chords to the title track fade in and kick off this album with a solid rocker. The single “Crazy Old Mothers” features that tasteful piano from Mark Stanway and leaps into a great chorus, and goes back and forth – classic Magnum! “Gypsy Queen” starts out soft with light sweeping keyboards and Bob Catley’s vocals, and then the band kicks in giving this an almost heavy dance and rock chorus, and again settles back down. Just love how these guys can go from a ballad to a storming rocker – all in the same song! I’ve enjoyed every album since I got in to them with the ‘Moon King’ album 9 years ago, and this is possibly my favorite since then! Just one classic Magnum track after another – “Princess In Rags”, the ballad “Your Dreams Won’t Die”, the dramatic “A Forgotten Conversation”, epic piece in “Twelve Men Wise and Just”, “Afraid Of The Night” – love Tony Clarkin’s writing and playing, and solos. Bob Catley being one of England’s most under heard of lead singers. A damn shame these guys never play in North America, hence remain somewhat of a mystery, except for those of us fortunate enough to discover them.

Those early Dio albums with Vivian Campbell were a classic era for me, and I never really dug the albums that came later, with substitute players as much. That original ‘Dio’ line-up had a distinctive sound and the songs! Years following Ronnie James Dio’s passing here is the original line-up back, with singer Andrew Freeman. Obviously not exactly a Dio album, but close in many ways. Freeman does an admirable job, though he sounds to be pushing it at times to come off as heavy as the music. The songs are good, and a few favorites have the potential to be in the same class as some of those early Dio faves; one could easily imagine Dio taking on such standouts as “Devil in Me”, “I Am Revolution”, and the more melodic “Starmaker”. Overall I really like this album; it’s a grower too, as it just gets better each time on.

Credit to Vivian Campbell for returning to his roots and playing something real again, and for handling Jimmy Bain’s passing with dignity in dealing with the fans, class act; and here’s wishing Campbell the best with his own health. And here’s hoping these guys find a way to keep it going in honor of Ronnie and Jimmy. 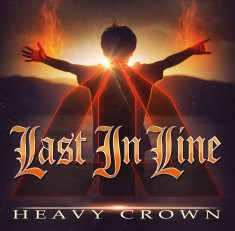 Another act that sort of sticks to a winning formula. German guitarist Axel Rudi Pell always plays it heavy, coming from that Ritchie Blackmore school of guitar and mystique. You get the cool scary cover art, the slow eerie intro, then the opening riff of one of many cool rockers here in “Fire”. Johny Gioeli [Hardline] suits this stuff fine. Plenty of cool chugging and thundering rockers here – “Falling Star”, “Sons In The Night”, “The King of Fools” – big riffs and solos throughout. But there’s nothing really new here, which is fine by me, ‘cause I like this. There’s the slower paced epics in “Forever Free” and the title track [classic ARP!], as well as the token ballad “Lost In Love”, which delivers a heavy chorus, and then there’s the token cover tune with “All Along The Watchtower”, which is quite a different arrangement [Axel shreds on this; killer]. All so predictable really, but really damn good heavy rock from Axel and band! One of his best!

The Swedish band consisting of former members of bands such as Necophobic, Nifelheim, Entombed, and [still] Enforcer. These guys clearly celebrate the New Wave of British Metal, and classic metal influences, much of this sounding heavily along the lines of Thin Lizzy and very early Iron Maiden, while the band also sites the likes of The Scorpions and Blue Oyster Cult as major influences. This is great stuff, 2 guitar, vocals at times reminiscent of Phil Lynott, other times of Paul D’ianno. End to end powerful early metal sounding songs! Kicks off a-blazing with the Thin Lizzy type rocker “Die With Me”, and doesn’t let up much. Killer cuts in “Danger”, “Berlin Model 32” and ‘Over The Worldly Walls”. “Clockworks” sounding like a long lost early Maiden classic, while “Subvisual Sleep”, musically, sounds like it would’ve sat comfortably on Judas Priest’s Point Of Entry album. Every song rocks here – “Sceneries”, “Coming Home”, and mini epic “The Storm”. This album really has to be heard.

The Treatment – Generation Us [Frontiers]

Goofy cover, really. But this album starts out promising with the AC/DC riff rock of “Let It Begin”. Like the guitars and tune, but not crazy about the vocals or the chorus. “The Devil” is a slower track, but it’s got that AC/DC guitar rock feel as well. Plenty of cool riffs and rockers here with “Cry Tough”, “Light The Light”, and fast paced “Tell Us The Truth”. Standouts for me include the near ballad “Backseat Heartbeat”, and mid-tempo “Bloodsucker”, which, again – has a bit of an AC/DC feel to it, and the vocal really suits this one. This one’s a grower, and I’ll be looking to hear more from these guys.

Well, I rediscovered Wasp when the last album came out in 2009 – Babylon. I loved the newer sound and line-up that Blackie Lawless had put together with bassist Mike Duda, guitar player Doug Blair, and drummer Mike Dupke. It lead me to go back and pick up a number of Wasp albums I’d missed in the years after 2 albums in ‘Kill F**k Die!’ and ‘Helldorado’. Blackie’s now writing about his Christian faith, but not so much in a preaching way, and more in a scary way. Musically very heavy, but with the 2 most commercial type rockers leading off with “Scream” – which bares some similarities to Babylon’s lead off track “Crazy”, and then the single “Last Runaway” stands out as well. But things get darker and heavier on Golgotha with the epic ballad “Miss You”, a song about dealing with a loss of a loved one, and from there on this album is just fantastic song after song. “Fallen Under”, “Slaves of the New World Order”, and “Eyes of My Maker”… all have slow light intros and build up in to heavy Wasp rockers – these are easily my favorites on this album. Love the production. “Hero Of The World” is another cool rocker that follows suit, but it seems to borrow intro and feel from The Neon God albums. The title track closes out here, and whether you follow Blackie’s faith or not – you have to appreciate how much passion this guy puts in to it all. One will also notice that the title track bares a striking resemblance in melody to the Queen classic “The Show Must Go On”. But, oh well. Love this album! I really loved ‘Babylon’, but IMO Golgotha is a step up, delivering 9 great tracks, without any covers to dilute things. Blackie’s come a long way from his meat tossing days; a guy long overdue his credit as a serious writer and singer.