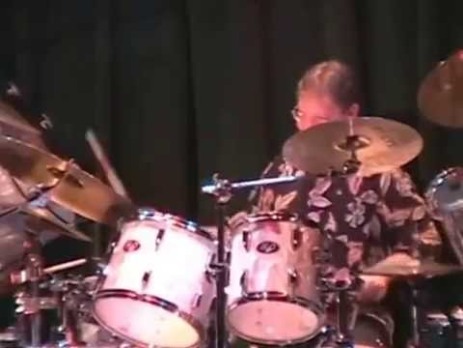 So, going through old interviews and exchanges with people I had over the years that I discovered on old discs [and floppy discs!], I came across these replies I received from legendary Canadian drummer Bob [Herb] Ego, who had played in numerous bands, most notably Witness [pre Streetheart], Painter, Hammersmith, and Streetheart! Bob never replied with the questions I’d originally sent – so I don’t have ‘em! And in reading this, I see there was a 2nd part, which I never got from him. But a good bit of Canadian rock history and info from the man.

*Check out Bob’s discography at >

When I played in, “Painter,” it was after I had left Witness (which would have been from 1971-1974). Granfalloon would be 1976–check out the live recording on my Granfalloon link on my web site– That was a fun band! Bob Duetscher (Guitar player) played in quite a few bands in western Canada and has his own web site.

Painter was originally the, “49th parallel” — who had a hit record called, “Labor,” great song. I’m not sure who wrote it but I will never forget it. Danny Lowe, also the main guy in 49th Parallel, started Painter with a drummer named Barry (can’t remember last name — sorry) I met him once — nice guy.

After I left Witness (this can be confusing ‘cause there was more than one Witness – this is why my discography is so important to understanding how things happened) anyway, after I left Witness, I moved to Calgary and joined Painter. Danny Lowe, Doran Beattie, Wayne Morice (who I just heard from a few days ago), and me — This was Painter! Barry Allen came on board after we were signed to Elektra. Painter got signed to Elektra after we decided to go with Bob Zimmerman as our manager. Before Painter, Zimmerman managed the Chamber Bros. He knew a lot of people in the music biz and was able to make people stop and listen to our demos.

The first single, “West Coast Woman,” was written in the basement in, I would say, less than 15 min. One thing about Painter–there was a magical chemistry. We never spent much time writing. We just sat down and played music. Whatever came out was on the most part pretty damn good to the point where we kept it and recorded it!

We were based out of Seattle at the time when West Coast Woman was released as our first single. The radio response was very good. I believe it hit #1 in Atlanta, Seattle, and Las Vegas – in general. it did very well throughout the States. I know the record company folks were pleased. The second single from the Painter album was, “Song for Sunshine,” it didn’t do much but that one was the record Co. idea to release. We had other suggestions that didn’t happen. I had a lot of input in the arrangements with Painter, however, I was not credited in this way for any royalties. I was (on paper) just the drummer. We were a lot heavier live than on record – with extended solos, intros, etc. And at the time our influences varied from Elton John, to Led Zep, to Jimi Hendrix. I was very influenced by both Mitch Mitchell and Joe Morello. I don’t think we were aiming for anything other than just creating Painter music (we never analyzed anything we just played!). I like all the songs from the Painter album. When we played Atlanta Georgia at a club called, “Richard’s,” (with Charlie Daniel’s band and Soft Machine) Frank Zappa was supposed to sit in with Charlie but when he heard us earlier in the week he told his manager that he wanted to play with us instead. Come Saturday night, Zimmerman comes in the dressing room and tells us he has been talking to Frank Zappa’s manager and that he asked if Frank could sit in with us – we said, “I guess it would be OK.” Laughing and answering, “Get out of here” etc . . .. we didn’t believe it was true until Zappa showed up and wrote a song live on the spot called, “That’s Why I Knew That it Was Love.” We went out and performed it live on the air. People were blown away because of the fact he was there and so were we. There’s a lot more but to move on to your other questions . . . we toured with Steely Dan, Paul Butterfield Blues band, Canned Heat, Five man Electrical Band, Red Bone, Black Oak Arkansas and many more. Painter did not open for April Wine. I did, however, when I was with Streetheart. Jerry Mercer (drummer from April Wine and I shared a practice room during the tour– great guy and great drummer). There are lots of unreleased painter songs however you must see my discography.

Three of the guys did move on from Painter to form Hammersmith. I had left the band to get off the road for a while. I wanted to teach, perform, and continue to record for Tommy Bands studio in Edmonton with Les Bateman for Witness incorporated. “Jezebel,” “Harlem Lady,” great songs and great band. Anyways, I think Painter changed the name to Hammersmith, to get out of legal bindings with Zimmerman. I’m not sure who they had on drums before they were ready to record Hammersmith – however it wasn’t working out so they asked me to perform on the album – I did all of the drumming on the album but was not credited for it–due to the fact that they were trying to market a band (and their faces) not “studio guys.” We are still very good friends and keep in touch from time to time.

A lot has happened since those days.

Danny Lowe went on to invent Q sound and made his mark big time.

Wayne and Doran are in the movie biz making the hit X-files–and others.

I’m still doing studio work, seminars; drum clinics, and occasionally filling in for old friends. I’m also working at a music store where I’ve met some guys with very impressive backgrounds – the main thing, however, is that they’re really good people. I will try to get to more of your questions about Streetheart soon. I’m doing a clinic/performance concert here that is taking all my time for preparation. I’ll get back to you in a couple weeks or so. Thank you for the interest in these great Canadian bands!

5 thoughts on “BOB EGO : Interview From The Archives with Canadian drummer bOB eGO”