By the time I had discovered Alice Cooper, in the early ’80s [due to my age] Alice was out of fashion. He was not touring, and his most recent ’80s albums [Flush The Fashion, Zipper Catches Skin, Special Forces…] could all be purchased for 99 cents at Avondale variety store! At that time I’d  just bought the albums [old and newer], assuming I’d missed the whole ride of Alice’s career. But then magazines started mentioning an Alice Cooper comeback. There was a forgettable horror flick called “Monster Dog”,  which starred Cooper, as well as including a couple of new tracks. Then there was a guest vocal on Twisted Sister’s “Be Chrool To Your School” [and in video]. Then there was the theme song [and another song] appearing in the latest Friday The 13th.  And finally, after a 3 year recording absence – a new album, along with a new direction, and new energy. 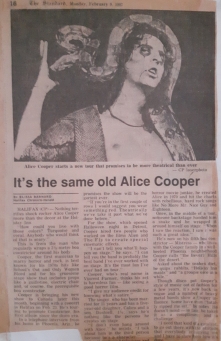 There was plenty of publicity for the Constrictor album, as well as the tour [The NIghtmare Returns]. Q107 in Toronto aired “Teenage Frankenstein”, pronouncing Alice was certainly back. For the time, Constrictor was a good album – tracks like “Give It Up”, “Life And Death Of The Party”, “Crawlin'”… stood out; though the live show would only feature 3 songs from this album. Beau Hill produced this album [Michael Wagener produced 2 tracks, as well as mixed the album], aiming for a very timely 80s sound. Hill’s credits included Stevie Nicks [co-writes], and 80s ‘metal’ albums by Ratt, Kix,  and Warrant. As much as I liked the songs from this album, the the overall sound let it down a bit, lacking in weight, making this album fairly dated sounding.

The new band featured guitarist Kane Roberts, bass player Kip Winger [before Winger!], keyboard player Paul Taylor [aka Horowitz], guitarist Steve Steele, and Ken Mary on drums [not all were on the album]. On stage in was a return to the gothic Alice, with slasher films being a big influence at the time. Kane Roberts was built like a bigger version of Rambo [complete with a machine gun guitar that shot sparks] and offered a new metal sound to the AC classics; he would also co-write the songs for Constrictor and the next album.  “Welcome To My Nightmare” would begin the show, and it was a fast paced – no letting up,  gory show, with some theatrics or blood for every song. It was essentially a greatest hits, plus classics like “Dwight Fry”, and a few other album classics + 3 new songs – all ‘metaled’ up for the period, finishing up with the guillotine!  My first Alice show, and I couldn’t wait til the next one!

The follow up album Raise Your Fist And Yell  followed soon in 1987. Co-written with Kane Roberts, and featuring Roberts, Mary and Winger, Horowitz, and produced by Michael Wagener, who’d previously worked with Accept, Dokken, and Bonfire. This album was a heavier production than Constrictor, and featured plenty of great anthems in “Freedom” [the first single and video], Give The Radio Back, and Step On You. Side 2 featured favorite “Prince Of Darkness” – which was featured in the John Carpenter movie ,of the same name that year. Alice would also appear in the movie. Side 2 also featured a trio of songs revolving around a serial killer – “Chop Chop Chop”, “Gail”, and “Roses On White Lace” would also feature in the live show, with gory results.

I preferred this album largely due to the sound [they were fairly equal in performance and song quality, IMO]. The live show would also include Devils Food & Black Widow, and close out with Killer and Alice being hung.
During this time Kane Roberts released his own album, self-titled, featuring Steele on bass, and drummer Vitor Ruzzo [RIP]. Anyone who liked Constrictor or Raise Your Fist And Yell could easily get in to Robert’s solo album. It was hard hitting, big sounding 80s rock anthems, with songs like “Rock Doll” [single/video], “Triple X”,  “Full Pull” … a shame it wasn’t bigger at the time, with Roberts being Alice’s right-hand man at the time – both on stage and in interviews on TV and radio.

Following this period Alice decided to take a new direction with Trash.  It would be the last Alice Cooper album that Roberts or Winger would appear on [both on 1 track each]. Winger and Horowitz would go off as ‘Winger’ and Roberts would release a second solo album a few years later. I would’ve loved to have seen another album from this line-up, before Alice started bringing in the likes of Bon Jovi and Aerosmith to guest and co-write on Trash, and then the vast list of guests on Hey Stoopid [tho this is one of my favorite AC solo albums].
to be continued…